Has anyone wondered where this Sexy crooner is? Her sudden disappearance from the music industry is giving a lot of concern and unanswered question.

Imagine waking up one day to learn that our beautiful screen goddess has suddenly disappeared from the scene with no word about her whereabouts. The feeling could be one of disappointment and sadness.

And that’s exactly the expression on the faces of fans of Cynthia Morgan, a self-proclaimed Nigerian queen of reggae/dance hall music about two years ago, when their music idol disappeared without a trace amid unforeseen circumstances.

The dance hall sensation came into the Nigerian music scene with high hopes such that no one would have expected to see her music career declining so quick.

For over three years, after debuting in the nation’s music scene, in 2013, Cynthia Morgan stood out and reigned supreme as the Queen of Nigerian Dance hall music, dishing out reggae tunes that kept her fans in touch with memories of the movie Third World Cop.

She was creating buzz with her style of music, which is a fusion of pop, hip hop, dance hall and rap. Her profile was steadily on the rise, and many respect her because she’s got guts.Cynthia Morgan shot into limelight following the release of two singles titled “Don’t Break My Heart” and “Lead Me On”, which received massive airplay.

The dance hall act enjoyed a rise to fame and success as her hard work earned her a nomination for ‘’Best Reggae/Dance hall single’’ at The Headies 2014.

She continued on this path with banging singles such as ‘I’m taken’, ‘Simati Niya’ and ‘German Juice’ which won her Best Reggae/Dance hall single at The Headies 2015, ahead of acts like Patoranking and Timaya.

She was also nominated for the much coveted Next Rated Act category, which she lost to Reekado Banks. However, as trouble began to trickle in the camp of the Okoye twins, so also did her career begin to hit glacier rocks, having been signed to Jude Okoye’s North side Entertainment.

But those in the know blamed her reduced visibility following her unceremonious exit from the label. And Morgan never made any effort to debunk the insinuation till date. 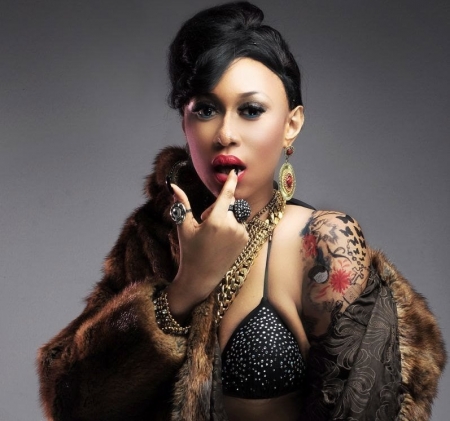 Meanwhile, it’s unclear whether the break up of Psquare contributed to Jude Okoye’s lukewarm approach to managing Cynthia Morgan. A source close to her once explained that the managerial transition played a role in her disappearance, but assured that everything is now in order and the singer would be releasing her first single under the new management in the nearest future, which she later did.

Apart from this, the dance hall singer had other issues to contend with it. One version of the reports said that the singer took time off to settle some personal issues as she was reportedly facing a major debt crisis at a time.

According to reports, the sensational singer was experiencing some financial challenges which were disrupting her career. Amidst the crisis, court documents showing that the singer had been charged to an Ikeja High Court over her inability to pay the rent of her Omole apartment also went viral online.

And to worsen her situation, the same day the singer was allegedly served court papers for defaulting on payment of rent, waste bills. She was also served with court papers for evading tax. It was one trouble, too many for the Edo State-born singer.

Popular indian Actress Completely Forgot she was Married by saying this.

“I’m so much more than my body” – Singer, Lizzo says as she poses nude for Rolling Stone Magazine (Photos)

Popular indian Actress Completely Forgot she was Married by saying this.

“I’m so much more than my body” – Singer, Lizzo says as she poses nude for Rolling Stone Magazine (Photos)

My mansion was built before I became Senator- Dino Melaye clarifies

”You don’t have sense’ – Fan blasts BBNaija’s Seyi Awolowo for...

There’s nothing wrong in raiding ‘Yahoo boys’ at nightclubs – Magu

God Is Speaking To Me, These Were Micheal Jackson’s Last Words...

Man throws baby up playfully, then this happened (Photos)

I Sleep 10Hours a Day Despite My Busy Schedule – Femi...

Mercy Johnson Reveals Why She Produced ‘Legend Of Inikpi’

Nicki minaj reveals she and her fiancé Kenneth petty might get...

I Feel Bad When Actors Come Online To Beg For Money...

I don’t like being questioned about my source of income –...

There Is No Happiness Or Misery In The World – Georgina...

Mercy Johnson Shows Appreciation To Her Husband For His Support

Serious Drama in Church As Bride And Mother-In-Law Embarrassed Themselves on...

Pasuma Celebrates His First Child and Daughter As She Turns 29

PSG and Chelsea in talks about Cavani’s price tag

“Since I Joined Womanhood, My Life Has Been Good.”- Bobrisky, Nigerians...

Mbappe names four clubs that could win the UCL this season

From Rock Star To Africa’s Number 1; Kuami Eugene Discloses Why...

‘My period just came and It has stained my dress’ –...

Lassa Fever Is Back And Here’s What You Need To Know...

Do you believe PES is better than FIFA? Watch this hilarious...

The sad story of taxi driver who lost his sight and...

Nicki Minaj looks sensational as she steps out with her man...