An aggrieved Nigerian feminist has taken to her social media handle to drag Regina Daniels mother, Rita Daniels. The lady who lambasted the former child’s actress mother for being too greedy and taking advantage of her daughter by using her as a cash cow.

According to Ton Trend the lady identifies as Omo Chioma, claims in a post she made on Facebook that Mama Regina is a very greedy woman who allowed poverty dictate her daughter’s future without considering the said daughter. See Screenshot below;

Regina Daniels who not too long ago got initiated into the womanhood of Anioma community with her mother standing side by side with her.  The actress was officially married as 6th wife to the billionaire politician, Ned Nwoko on the 28th of May 2019 and that has sparked alot of mixed reactions from both celebrities and the Nigerian populace at large.

”Mama Regina is a very greedy woman. Poverty eroded a major section of her brain,she used her daughter as a cash cow. Shame!Mama REGINA.  A greedy piece of crap. A woman who should have been barren. A certified sl*t. Yes quote me anywhere.”

”If you are on my list of friends and you  see this as great that a man of 62 will have a go at a 17 year old then i dare-say you are a BEAST A CLOSET PAEDOPHILE and a sick IDIOT. A POVERTY STRICKEN, LACK-OF-SCRUPULES, excuse for a human. I feel for the little girl who instead of being introduced to a PEN was handed an overgrown, wrinkled pole at such a tender age by a Mother who is as useless as they come.”

Recall, we reported that there were claims that Regina Daniels’ mother, Rita Daniels made her daughter marry Ned Nwoko to break a generational curse in her family. According to a post by an Instagram blogger, cutie_juls, Regina Daniels’ mother allowed the union between her daughter and Ned Nwoko because the generational curse needed to be broken. She wrote;

”Then your 17 year old girl making it the 4th generation comes home allegedly pregnant with a 59 abi 62 year old man. Would you rather the man pays her bride price to break this “generational curse” happening in continues 4 generation or you will allow your daughter end up bearing kids at home with no father or husband as per tradition?”

”Maybe she pushed her daughter in there out of pain and disappointment. Especially when it will be difficult to get an influential person like #NedNwokoarrested to impregnating your teenage daughter in a country like Nigeria where money can make the laws look bull**it” 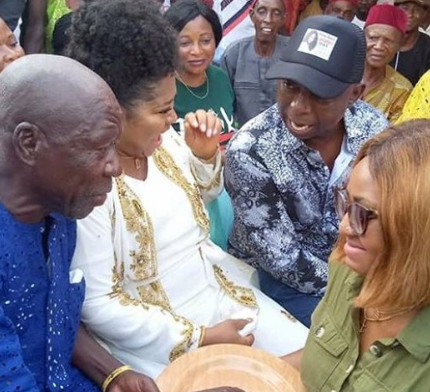 ”The whole thing is unfortunate and sad. Why are we not blaming #ReginaDaniels for giving her beautiful body to Pa Ned? Why are we not blaming Pa Ned who is a politician in Regina’s state to have no better by helping Regina and her family out financially without any strings attached? Must he have sxx with the 17year old who is probably younger than most of his children before assisting her financially even when he’s already got women in his house as wives and probably some side chics out there?”

Next Kaduna governor will demolish more houses than me — El-Rufai

Obasanjo contributed to Nigeria’s crisis, he should mind his utterances- Femi Adesina

Timi Dakolo shares his thoughts about the depreciation of the Naira

I shot a shot at my friend’s Ex-boyfriend, he agreed and we are getting married soon – Lady reveals

”You can never bring a good man down, who God has blessed no one can curse”- footballer, Jude Ighalo, writes after wife, Sonia, called...

Next Kaduna governor will demolish more houses than me — El-Rufai

How bandits fulfilled their promise in the Kebbi abduction – Rep. Sununu

Should You Get A Loan For Credit Card Consolidation?

Social media has done more danger to us – Oyedepo

Obasanjo contributed to Nigeria’s crisis, he should mind his utterances- Femi...

Timi Dakolo shares his thoughts about the depreciation of the Naira

‘You can be rich and spiritual, poor and unspiritual because your...

Most of your favorite celebrities are lesbians – Actress Chika Lann

“If Tesla used cars to spy in China or anywhere, we...

Mummy i am sure heaven stand to welcome you home” Damilola...

Kim Kardashian baptized her kids in a church and people think...