The AIB in a statement explained that the engine of the plane brushed the runway surface as it was about to land although no injury was reported.

The incident occurred around 5am on Saturday with five hundred and fifty passengers (550) on board.

Other sources say the aircraft developed a technical fault resulting in its forceful landing, damaging one of its four engines. Part of the tarmac and some materials were also damaged by the aircraft which skidded off the runway.

In reaction to these varied reports, Max Air LTD has released a statement detailing all that transpired with regards to the said crash-landing of aircraft.

Below is the airline’s full submission on the matter. 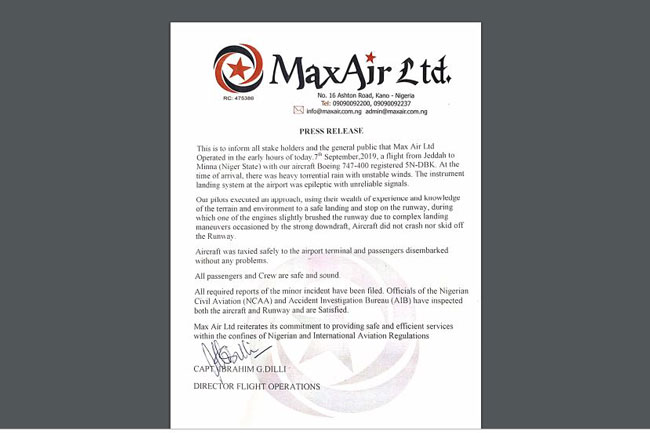 E! News cancelled after 29 years on air due to the economic impact of Coronavirus

If you calm down, you will see President Buhari’s achievements — Femi Adesina tells grumbling Nigerians

E! News cancelled after 29 years on air due to the economic impact of Coronavirus

If you calm down, you will see President Buhari’s achievements —...

DJ Kaywise gifts his mum a car on her birthday (photos)