Apparently, the model had been booked to make appearances at four important shows at the just-completed Cannes Films Festival in Monaco.

According to news reports, she was also booked for meetings with the World’s top modeling agency, Elite Models, before she suddenly disappeared a day after arriving in Paris.
Although, she had previously performed in shows in Nigeria, Ghana and Amsterdam alongside world-class designers like Diana Pinto, Smocky world and Kingsley Ushie and has already been to Portugal and Amsterdam to take part in the International Fashion weeks. This particular trip was to enable her to gain a solid ground and build her status with modeling agencies in all the significant fashion capitals.
Her management claimed they went out of their rented apartment when they got to Paris to purchase drinks only for them to come back to a sealed door. Worried about the safety of Grace, they broke down the door but she had already disappeared taking along her passport and other documents. However, she left her luggage behind.

After the sudden disappearance of Grace, her management reached out to the Paris police to track her down. It was revealed that they saw her as she fled on the CCTV. An extensive investigation was carried out and it was also made known that she had been plotting the scheme with her family all along and it started even before she left Ghana.

According to her management, her mother, Sarah Essien happens to be the brain behind the disappearance because she helped her and gave her the information on how to elope and locate other family members already settled in France.

Here are WhatsApp conversations allegedly between Grace and her mother. 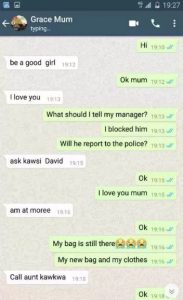 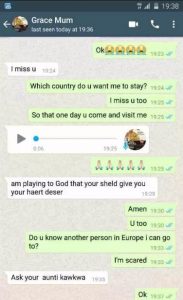 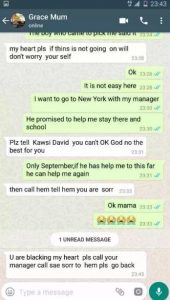 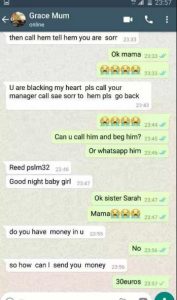 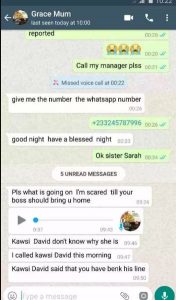 Members of a cabal were enriching themselves with susbidy payments – NNPC GMD, Mele Kyari

Members of a cabal were enriching themselves with susbidy payments – NNPC GMD, Mele Kyari

Our recovery from COVID-19 fallout must be innovative ― Osinbajo

Jennifer Lopez, 51, puts her curves on display in pink bikini,...

BBNaija: Ozo evicted from the show, Nengi breaks down

Bbnaija: Tricky Tee has been evicted from the Big brother naija...