In a statement, Detective Inspector Jess Milne, said: “The piece of art that has been stolen is a high value toilet made out of gold that was on display at the palace.”

Police said the burglars broke in overnight and left the scene around 4:50 a.m. BST Saturday morning. Law enforcement received a call about the burglary at 4:57 a.m. No one was injured. 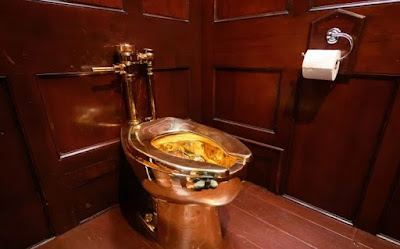 The artwork, titled “America,” was created by Italian artist Maurizio Cattelan and was first displayed in the Guggenheim in New York City, N.Y. in 2016. The fully functioning toilet, which visitors were welcome to use is made of 18-karat gold and reportedly estimated to be worth more than $1 million.

It had just opened at Blenheim Palace on Sept. 12, and was scheduled to run through Oct. 27.

In a press conference Saturday, Inspector Richard Nicholls said a 66-year-old man has been arrested “in connection with this incident.” He also said police believe the burglars used two vehicles.

It had just opened at Blenheim Palace on Sept. 12, and was scheduled to run through Oct. 27.

Amazon CEO, Jeff Bezos becomes the World’s first person to have a net worth of $200 billion

Our recovery from COVID-19 fallout must be innovative ― Osinbajo

Jennifer Lopez, 51, puts her curves on display in pink bikini,...

BBNaija: Ozo evicted from the show, Nengi breaks down

Bbnaija: Tricky Tee has been evicted from the Big brother naija...