A young artist was gifted a sum of one million naira for painting a beautiful portrait of Kogi state governor’s wife.

The lovely portrait attracted the attention of people who brought it to her notice.

Grateful for the governor’s wife kind gesture, the artist thanked her on social media.

A young artist named Bright in Chukwudi recently got highly rewarded for painting a pretty portrait of the wife of Kogi state governor. The lady named Rashida Yahaya Bello stumbled on the artwork after it first drew the attention of many Nigerians.

Bright, who is adept at painting hyper-realistic portraits of people, got a sum of N1 million from the governor’s wife. While painting the picture of the lady, he shared a video on his Instagram page in which he showed the process of the project.

Later on, when he finished with the work, he shared another post showing the final look of the portrait and tagging the governor’s wife in the hope that she would see it and reward him for it.

See the posts below:

Who remember when I posted this video of the First Lady @rashidayahayabello asking you to like and tag her until she sees it. Well, I want to inform you all know that she reached out to me and supported me with sum of 1MILLION naira. Am still in shocked that we still have good people like this in this country. I have done a lot of work for celebrities , politicians even footballers but they all ignored me and sometimes blocked me Becos am a nobody but Her Excellency decided to bless me. Pls help me thank her for not ignoring me like others. @rashidayahayabello ma. thank you over again for appreciating my talent. God will continue to bless you. @instablog9ja @tundeednut_blog @vivianlam_glamour @viviaan @rashidayahayabello

Upon seeing the beautiful portrait of herself, Rashida Yahaya Bello reacted to it in a comment and announced that she had given the artist N1m.

See her comments below: 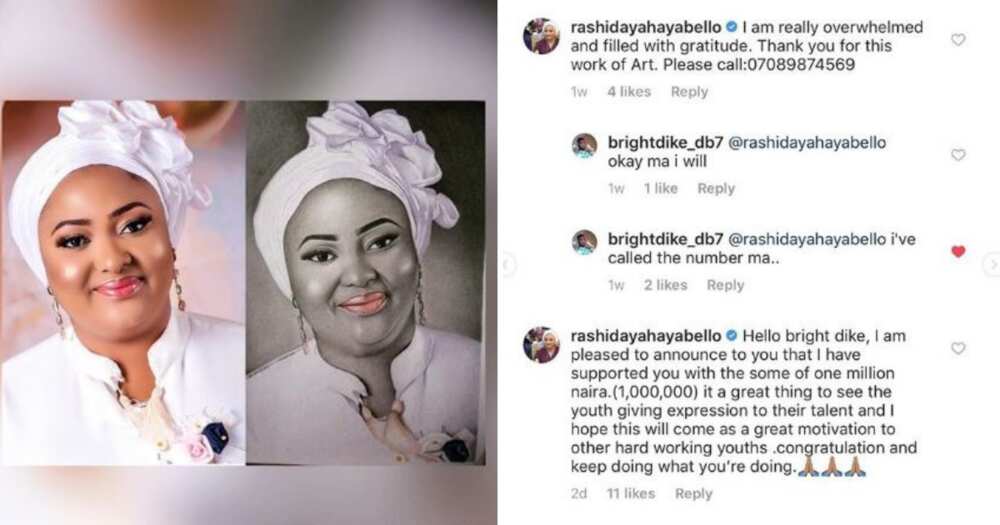 Bright has come out to thank her for her benevolence. This is how you unblock yourself on WhatsApp when someone blocked...

Mum let rapist husband abuse girl, 8, until she got pregnant

BBNaija: I’ll give N60m to charity, develop Kogi if I win...